Guys,
I spoke with Russ Schulke today. You may recall he did the Stalingrad presentation last year. I inquired about SOS4. See below for his response.

"Contracts were signed in September 2015! Right now all the new scenario sheets have been created and being reviewed by the SOS4 group for a second time. I will get to the map mid-February which will be the hardest part , then it gets easy after that. Once the map is done we are going to start a light advertising campaign, then in Summer 2016 it will go to a crowdfunding site, likely Kickstart and be released in 2017.

I would like to visit your gathering again but this time with no presentation. I would like to sit up a table and have a drawing for a half off price ticket (redeem by me) for when SOS4 comes out. Each person would have to sit 10 minutes with me reviewing my SOS4 items (or talk Stalingrad) and they will get a ticket and before I leave that day, I will have a drawing."

I invited him to visit again this year.

Look for me on Monday the 15th!

Awesome!! Can't wait for him to come. love the gaming candy!!

Request clarification: I saw SoS being played a couple of years ago at WFest as a monster game. It seemed as though it started with about 3 players per side but people dropped out as the geographical action condensed. Was that what happened and is that why the game seemed to shrink as the week went by, or was there some other problem that I didn't comprehend, perhaps something that makes a new edition necessary?

I didn't ask a lot of questions that year, but I did pick up that there were bonuses for keeping components of units together and that the bonuses could stack, so having a battalion together got you a bonus, likewise for all the battalions of a regiment. That sort of thing made me want to play, but of course the game was shrinking rather than growing.

Certainly Russ knows his material and I'll be interested to see what he's got going on in that regard this year.
Top

I dropped out partly because the action condensed but mostly because literally nothing was happening on my front, very static. Hours of waiting between turns, finishing my turn in minutes (mostly defensive repositioning, not even much sparring)...so when something interesting became available I jumped at it.

I was on the Soviet right wing, which has the potential for lots of maneuver and clashing early on, but the way it played out our time was not that active. In essence I successfully pulled the front inward responding to pressure where necessary and collapsed down in good order when the Germans made me. The pursuit was cautious rather than aggressive; while it was a nice exercise in fighting withdrawl it wasn't pulse pounding excitement.

Don't think there's a big flaw in the system, though Merv or Lee Hamer are probably better placed to address that. The nature of the battle is part of the problem, too, because there's a definite war of attrition, throw the guys into the line component.
Top

I enjoyed the game very much and would play again. The sequence of play is odd in some ways and takes some getting used to, but I thought it gave a good representation of the battle. The games emphasizes keeping units together at the division, regiment and battalion level. The smaller, more ad hoc Soviet units tend to melt away after a few battles while the German divisions are much more robust. I was a Soviet player in the south, facing Rich. We basically pounded each other into an exhausted stalemate, but Rich almost broke through at one point.
Todd you bring up an interesting point - both Rich and I were fighting with spent forces, so for the last couple of days at Winterfest we had little to do but try to recuperate. At that point we started playing around with Battle for Normandy...

Shawn and Merv had an epic battle in the center of the city, and most of the resources and artillery went there. Very cool.

I think that the revised game includes the early Soviet counterattack out of the city towards the north, which would be very interesting to see.

I really enjoyed that game! I had brought it to WF for several years and never played it before. No one interested. After actions report ranged from my "best experience ever" to Rogers not so impressed. Either you really liked it or really didn't.

I plan on playing that again as soon as The War Room is back up and running.

After interviewing 1000+ players over the last 30 years, here is the general opinions:

85% - Thumbs-ups: An accurate historical game that shows the brutality of urban combat.

10% - Thumbs-ups: “Shelfers” (lol) Purchase the game because it looked cool. Most opened it up, laid the map out on the floor, read the historical review book inside then packed it up and put on the shelf.

5% - Thumbs-down: Hope for a fast moving game with big sweeping (flanking) operations, didn’t understand that the game would end up with both forces fighting for 5-6 hexes for 15+ days in 10 different sectors of the city. 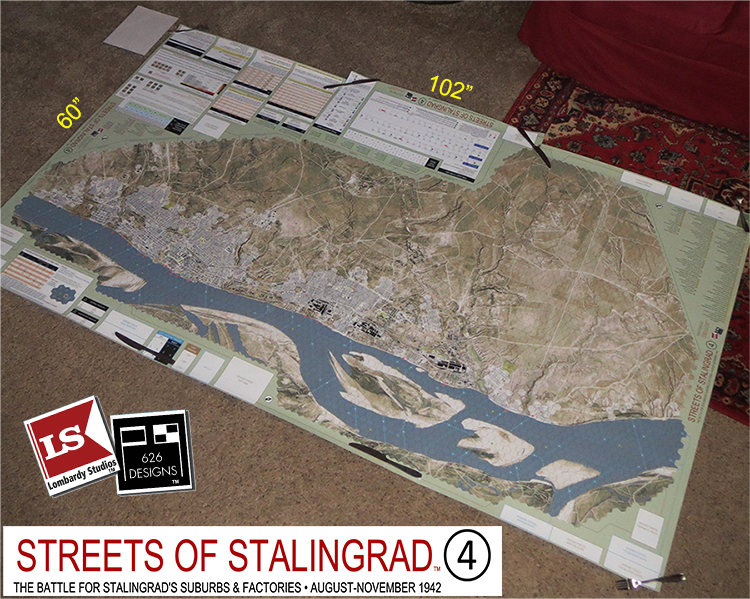